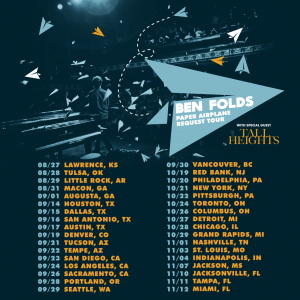 Fresh off their second European tour, electro-folk band Tall Heights along with Ben Folds announced this morning on socials that beginning August 27, the band will join Folds for 30+ dates on his Fall Paper Airplane Request Tour. Stops include NYC, LA, Miami, Seattle, and Austin and more.  In addition, Tall Heights will support Blind Pilot on four dates in October.  (Full list of dates below)

This announcement adds to the band’s already exciting year which has produced opportunities such as opening for The Chainsmokers at SXSW, a performance at Glastonbury Festival, and the release of their latest music video for “Horse to Water” produced by Matt Mahurin (U2, Metallica, R.E.M, Tom Waits, Sturgill Simpson). This Friday, July 28 they perform at Newport Folk Festival.

Earning comparisons of their emotive harmonies and poignant lyrics to the likes of The Shins, Fleet Foxes, Bon Iver and Lord Huron, the multi-talented singer songwriters, composers, and instrumentalists are Paul Wright on cello/vocals and Tim Harrington on acoustic guitar/vocals. They grew up just outside of Boston and got their start busking on the city streets, eventually raising enough to fund their first EP. Tall Heights has since received outstanding accolades from the likes of SPIN, Stereogum, NPR, Paste, The Wall Street Journal, and Fuse.