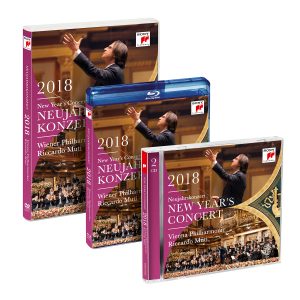 Since 1939, the Vienna Philharmonic’s New Year’s Concert has become a tradition and the world’s most famous classical music event. Few concerts can claim to generate such tremendous international interest as the New Year’s Concert from Vienna. Under the baton of the world’s leading conductors, the Vienna Philharmonic rings in the New Year with a gala concert from the magnificent setting of the Golden Hall in Vienna’s Musikverein. The event is broadcast to over 90 countries all over the world and watched by more than 50 million viewers.

The list of names of leading conductors who have led the Vienna Philharmonic’s New Year’s Concerts reads like a veritable who’s who of great maestros: Herbert von Karajan, Lorin Maazel, Claudio Abbado and Gustavo Dudamel to name a few.  For the New Year’s Concert 2018 world-renowned conductor Riccardo Muti returns to conduct the New Year’s Concert for the fifth time. He has conducted the Vienna Philharmonic for over 500 concerts, has a very close connection to the orchestra and is one of the most engaged New Year’s Concert conductors. Italian conductor Muti holds two music directorships: the Chicago Symphony Orchestra and the Orchestra Giovanile Luigi Cherubini. A prolific recording artist, Muti has received dozens of honors, titles, awards and prizes throughout his career.

The Vienna Philharmonic’s New Year’s Concert is unique and has often been imitated, but not equaled, with a live broadcast on television in over 90 countries around the world with over 40 million viewers.  PBS aired the 2017 concert on over 181 stations and will broadcast the 2018 concert nationally.  The repertoire for the New Year’s Concert features works by members of the Strauss Family – Johann Strauss, father and son, as well as Eduard and Josef Strauss.  Old favorites from their works are played alongside others that have never been recorded or are rarely heard. All of them programmed around two fixed points in the concert, The Blue Danube Waltz and the Radetzky March.

Due to extremely high demand, tickets for the three traditional end of year concerts of the Vienna Philharmonic are drawn by lot over this website at the beginning of each year. In this way, music lovers from all over the world have an equal chance to purchase these highly desired tickets. Between January 2 and February 28, 2018, applications will be accepted to take part in the drawing for tickets to the end of year concerts 2018/19. For more info on tickets, please visit here.