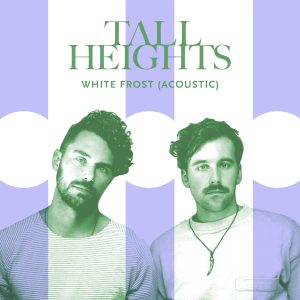 The band says, “White Frost is the story of someone who loved her partner for a long long time and and then lost him. They had constructed their own little existence and pushed away the outside world, a place that felt increasingly foreign the longer they stayed away from it. It’s not my story, of course it’s not, it couldn’t be, but it is a true story and maybe someday I’ll say whose. And it felt like the right time to tell it because I think that beneath our culture war lurks the fear of being a stranger in your own land.”

Leaving 2017 behind with achievements such as opening for The Chainsmokers at SXSW, a national tour with Ben Folds, and an impromptu acapella performance with Josh Groban, 2018 is looking like a big year for the breakthrough act. Starting with a 40-date US Winter/Spring tour with Nashville-based folk band, Judah & the Lion and Indie-rock band, Colony House. The tour kick offs on January 31, making stops in San Antonio, Phoenix, LA, San Diego, Las Vegas, Seattle and more (Full list of dates below).

Earning comparisons of their emotive harmonies and poignant lyrics to the likes of The Shins, Local Natives, The Head and the Heart, and Lord Huron, the multi-talented singer songwriters, composers, and instrumentalists are Paul Wright on cello/vocals and Tim Harrington on acoustic guitar/vocals. They grew up just outside of Boston and got their start busking on the city streets, eventually raising enough to fund their first EP. Tall Heights has since received outstanding accolades from the likes of SPIN, Stereogum, NPR, Paste, The Wall Street Journal, and Fuse.

For more info on Tall Heights give us a shout!