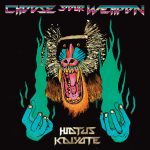 CREATE YOUR OWN VIDEO FOR HIATUS KAIYOTE’S “LAPUTA”!

Hiatus Kaiyote is excited to see what videos you come ... END_OF_DOCUMENT_TOKEN_TO_BE_REPLACED

The members of Australian future soul band Hiatus Kaiyote have unveiled Choose Your Weapon (Flying Buddha/Sony Music Masterworks), their most opulent, expansive and ambitious project yet.

In a short time, this quartet has embarked on an odyssey that began in bohemian Melbourne and has taken them to the Grammy Awards and beyond.

Hiatus Kaiyote’s story begins with a girl toting a novelty guitar. Bender, as everybody calls him, was hanging out at Gertrude’s Brown Couch in Melbourne’s groovy inner-suburb of Fitzroy when the striking Nai performed solo. “I didn’t know what she was gonna do because she was there with this really whack pink guitar,” Bender remembers drolly. “She started the set explaining that her guitar was locked in someone’s house and she couldn’t get it, so she had to borrow this one. It was like this child’s pink shit little nylon guitar. She just started playing and singing and I was like, Whoa, what is this? This is crazy! I was instantly blown away by the voice and the complexity of the tunes. I’d never really heard that combination of elements before. Straight away I was like, Oh, man, I gotta do a band with this girl.” He business-carded her post-gig but Nai, having no formal musical background, was initially unsure about collaborating, worried her songs were “a bit weird”.

In fact, the fantastically named Hiatus Kaiyote came together over time, its members encountering one another fatefully in various bands, cafés, and share houses. Bender, who’d made it his “mission” to seek out complementary players, found that challenging. Says Nai, “I was ready to give up on the whole band idea, because the musicians were amazing – like, really gifted musicians – but it needed more than that. It needed emotional connection to the music – but with creativity.” She retreated into her beloved desert… Hiatus Kaiyote eventually crystallized after the quiet Pez joined, along with his curious roomie Simon. “Once we were all in the same room playing, it was just like, This is what it’s supposed to be like!,” Nai enthuses. Hiatus Kaiyote jammed on their now Grammy-nominated song ‘Nakamarra’ – which Nai had just penned about a friend devoting herself to working outback with Indigenous Australians. “I still bring in songs,” she says, “but we can come up with shit from scratch together – and that’s way more rewarding. Usually the best stuff comes out when you’re just kinda winging it.” Indeed, Hiatus Kaiyote isn’t merely a soul/funk/jazz collective – it’s a boldly unconventional paradigm, with Nai a singer/songwriter, and Bender, Simon and Moss all instinctive musicians and bedroom producers.

Hiatus Kaiyote issued their acclaimed debut Tawk Tomahawk, of authentic homemade grooves, via Bandcamp – and shot a mesmerising bushland video for ‘Nakamarra’. Meanwhile, they started to attract influential industry fans starthing with Taylor McFerrin whom they supported at Melbourne’s historic Esplanade Hotel (“The Espy”). Simon recalls, “We got off stage and he was just like, What the hell was that?” The Brooklyn jazz-hopper championed Hiatus Kaiyote in an interview by the blog From Paris, which later profiled the band. Taylor also shared their music with BBC tastemaker DJ Gilles Peterson (they’d later win “Best Breakthrough Act” at his Worldwide Awards) and Anthony Valadez at California’s KCRW. The Roots’ Questlove proclaimed their music “undeniable”. “It really went gangbusters,” Nai says. Even Prince tweeted about Hiatus Kaiyote.

Salaam Remi, the esteemed producer who’s liaised with Amy Winehouse, Nas and The Fugees, determined that Hiatus Kaiyote be the flagship signing to his Sony imprint Flying Buddha. Hiatus Kaiyote repackaged Tawk Tomahawk with a new version of Nakamarra featuring a verse by Q-Tip, the legendary member of A Tribe Called Quest. They subsequently became the first Australian act to receive a Grammy nomination in an R&B category (“Best R&B Performance”). “Just to be propelled into that kind of platform and welcomed into that lineage is validation in itself,” Nai muses.

Today, Hiatus Kaiyote present Choose Your Weapon – imagining the future past, and juxtaposing the acoustic and electronic, over 18 tracks and a 70 minute musical adventure. Again self-produced, this sophomore album honors soul music’s history while reveling in its experimentation and globalization of sound. This album, in many ways, was born on stage —  “Most bands generally write their album as they’re making it, whereas we already had so much material that our fans were familiar with, so we owed it to them to actually document it,” Nai states. Nevertheless, the band did freely explore in the studio, serendipity their muse. And the outfit fully utilized their accumulated vintage synthesizer. “The synth is a really interesting bridge between live instrumentation and production because it’s electronic, but essentially it’s still an instrument,” Nai observes. Above all, Hiatus Kaiyote, tracing the missing links between Rotary Connection, J Dilla and Flying Lotus, chart their evolution on Choose Your Weapon. “With our first record, we’d been together six months or a year,” Nai says. “So you put a couple of world tours under your belt and then you try to produce a record, it’s a whole other thing.”

Intense live, ‘Shaolin Monk Motherfunk’ is synth-funk boogie with a subversive prog-rock breakdown. ‘Borderline With My Atoms’ is quiet storm balladry evoking Minnie Riperton. Nai has depicted the serpentine ‘By Fire’ as “a burial song”, the former fire-dancer, who lost her father in a house fire, reclaiming the element’s life-giving over destructive force. Hiatus Kaiyote approached one of their idols, orchestrator/composor/multi-instumentalist Miguel Atwood-Ferguson to  put his “one man orchestra” on ‘The Lung’. The album’s poetic lead single ‘Breathing Underwater’, was conceived for Stevie Wonder, Nai reveals. “All of our icons kept hearing our music – and Stevie’s my favorite one. So it was like, What if Stevie hears one [of the songs]? None of them are good enough! We need to write a new one especially for Stevie. That’s why I have the key change turnaround – ’cause he’s king of that.” However, the lyrics tell of something else. “There’s so many love songs, but I wanted to make one that was about really simple forms of love that aren’t necessarily romantic – like the love of a cactus that can survive for over 100 years without water and then, when it rains, it blossoms in minutes,” Nai suggests. “People always use metaphors to express their love, but the metaphor is its own love within itself – and it is its own universe… So it’s like a love song to everything.”

On sequencing Choose Your Weapon, Hiatus Kaiyote realized “how epic every single song is,” says Bender, every one with intricate layers and its own “vibe”. “It was just like a huge, massive, complex puzzle.” As such, they’ve created spacious interludes.

In the past Hiatus Kaiyote have playfully dubbed their transcendent hybrid of jazz, psychedelia, soul, R&B, funk, hip-hop, electronica and worldbeat “multi-dimensional, polyrhythmic gangster shit”. Today Bender proposes the eccentric “wondercore”, Hiatus Kaiyote’s music is less a genre than an immersive experience – a trip. For Nai, the “key” descriptor for Choose Your Weapon is “cinematic”. “We definitely see the music as habitats – and each song is its own. It’s very visual.”

Wrapped in soul, blending poetry and polyrhythms, the music of Hiatus Kaiyote is in a lane all by itself. The Grammy-nominated four-piece band is set to return to stereos with their new album Choose Your Weapon on May 5th via Flying Buddha/Sony Music Masterworks. The 18-track, 70-minute odyssey from the Melbourne, Australia-based band takes listeners […]
Read More

Wrapped in soul, blending poetry and polyrhythms, the music of Hiatus Kaiyote is in a lane all by itself. The Grammy-nominated four-piece band is set to return to stereos with their new album Choose Your Weapon on May 5th via Flying Buddha/Sony Music Masterworks. The 18-track, 70-minute odyssey from the Melbourne, Australia-based band takes listeners on a journey through the group’s self-created ecosystem, populated with songs each embodying its own mini-cinematic sonic soundscape. The album is the hotly anticipated follow-up to their celebrated 2013 debut album Tawk Tomahawk. Look for the band to tour across the globe in 2015, including a North American Tour this spring.

Fans have already gotten a taste of what’s to come on Choose Your Weapon by way of their December 2014 EP, By Fire, which featured three of the album’s 18 tracks. “’By Fire’ is a burial song,” says frontwoman Nai Palm, about the personal track. “It discusses the creative and destructive forces of fire and uses this element as a reference point to express about my father passing away in a house fire. It also ties in with a story about a silver Navajo arrowhead I was given by a mystic.” The track has also been one of the most played songs on Los Angeles’ influential NPR station KCRW. See a live video of the band performing “By Fire” at a recent Paris show here: http://vevo.ly/3m1ErH

Choose Your Weapon was conceived on stages worldwide, whereas Tawk Tomahawk was born in the studio with musicians who were just getting to know each other as bandmates and newly formed family. Taking this new framework, the band – Nai Palm (vocals/guitar), Paul Bender (bass), Perrin Moss (drums/percussion) and Simon Mavin (keyboards) – honed the songs in the studio, transforming them into exquisite pieces of music, pushing the boundaries of their comfort zone.

“Making an album is like tearing your soul apart and gluing it back together, but new and improved, with anti-gravity rooms, glitter cannons, lasers and vast canyons of exotic animals,” notes Nai Palm. “I feel like that is expressed in the overall sound of the record, having four people essentially create what they think new universes and soundscapes should look like. There’s a lot of juxtaposition, but if you make something from your heart and a pure place of imagination, it tends to find a way to work out perfectly. Collaboration means your ideas evolve to be even more wonderful then your singular brain could have ever imagined.”

In addition to capturing the imagination of fans around the world with their innovative sound, Hiatus Kaiyote has also captured the attention of acclaimed musicians and media. Stereogum singled them out as a “Band to Watch”, and Gilles Peterson (BBC/Worldwide) named them Breakthrough Artist of 2013. Legendary producer/songwriter Salaam Remi handpicked Hiatus Kaiyote as the first signing for his new label Flying Buddha, an imprint of Sony Music Masterworks, and they immediately gave Tawk Tomahawk an official worldwide release in July 2013.

“Everyone who has come in contact with our music has promoted it,” says Nai Palm. “Questlove, Erykah Badu, Pharrell and Prince have gone out of their way to plug the band. There’s been so much support from the community of musicians locally and internationally. As a musician, that’s what it’s about.” 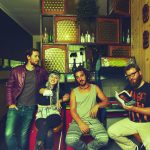 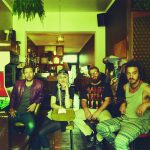