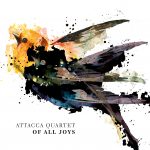 ATTACCA QUARTET share the new single and video from their ... END_OF_DOCUMENT_TOKEN_TO_BE_REPLACED

SHARE THEIR NEW SINGLE & VIDEO BASED ON MUCH-LOVED MADRIGAL

“FLOW MY TEARS” BY JOHN DOWLAND

TAKEN FROM THEIR UPCOMING ALBUM

WHICH PRESENTS THEIR UNIQUE TAKE ON MINIMALIST & RENAISSANCE WORKS. AVAILABLE ON SONY CLASSICAL ON NOVEMBER 5

(October 15 – NEW YORK, NY)  Today the GRAMMY® -winning ATTACCA QUARTET share the new single and video from their upcoming album “Of All Joys” which features their original take on great Minimalist and Renaissance works. Their absorbing instrumental interpretation of John Dowland’s madrigal “Flow my Tears” imbues the work with an other-worldly beauty and simplicity, which is mirrored in the music video directed by fellow Brooklyn-based artist Zac Nicholson – watch and listen now.

The quartet channel the joy of music and creativity and the excitement of being physically together again on their album “Of All Joys” which will be released on Sony Classical  on November 5. It’s title is adapted from a lyric – “And tears and sighs and groans my weary days / Of all joys have deprived” – from Dowland’s ‘Flow My Tears’. That line hit hard, says cellist Andrew Yee, and resonated with how isolation affected the quartet. “There was a feeling that we were recording music we had been deprived of – we hadn’t been so moved by music we had to stop and weep between takes. Hopefully we captured the joy of being able to soak all that in.”

Of All Joys begins and ends in the modern era with two seminal pieces by Arvo Pärt – “Summa” und “Fratres”; while Philip Glass’ String Quartet No. 3 “Mishima,” excerpted from his score for Paul Schrader’s 1985 film Mishima: A Life in Four Chapters about the influential Japanese author Yukio Mishima, provides the central anchor to the album. The quartet’s selection of Renaisannce works by John Bennet, Orland Gibbons, Jacobus Clemens Non Papa, Luca Marenzio and Gregorio Allegri explores the lineage of harmonic and rhythmic clarity and profound spirituality shared with the Minimalist works.

“Of All Joys” is a project that began with the group – Amy Schroeder [violinist], Domenic Salerni [violinist], Nathan Schram [violist], and Andrew Yee [cellist] – nominating their favorite pieces from both the Minimalist movement and Renaissance era, and considering how modern works resonate with what came before. The works chosen are unique in their harmonic structures as well as their instrumentation, and while some are vocal works and some are for strings, none were actually originally written specifically for string quartet. “We just want to play music we love, whether it’s originally written for our medium or not,” says violinist Amy Schroeder.

Such juxtapositions aid one of the quartet’s key beliefs – that music is music. “We truly believe in the beauty and importance of music from all eras,” says Schroeder. “Lineage is a beautiful thing in and of itself, and being able to get a glimpse into life and art of the past is a unique privilege.”

This translates to a rich sense of reverence for each of the works featured, but a freshness too. And, above all, respect and admiration, and love for the art. “In many ways this album expresses one of the biggest reasons one would choose to play in a string quartet,” says Schroeder. “The beautiful organ-like chords and the purity of the harmony in these pieces is extremely satisfying and even when ‘sad’ in nature, they are a true joy to play.”

“It is about the joy of being together and making something that is more beautiful that you can make yourself,” says violinist Domenic Salerni.

Transmitting all of this through music is not easy, yet “Of All Joys” is possessed of a rare depth and solemnity. Vitality too. For the joy to be found in communion can be fleeting; “Of All Joys” suggests we cherish it when we can.

Formed in 2003, Attacca Quartet present a new paradigm for string quartets in the 21st Century. The New York string collective— Amy Schroeder [violinist], Domenic Salerni [violinist], Nathan Schram [violist], and Andrew Yee [cellist]—have performed on six acclaimed albums, including Caroline Shaw: Orange. For the latter, they garnered the 2020 GRAMMY® Award in the category of “Best Chamber Music/Small Ensemble Performance.” Receiving widespread critical acclaim from New York Times, Noisey, and more, The Nation notably praised how the Attacca Quartet “lives in the present aesthetically, without rejecting the virtues of the musical past.”  Not to mention, they’ve performed at Carnegie Hall Neighborhood Concerts, New York Philharmonic’s Nightcap Series, Isabella Stewart Gardner Museum, and at Lincoln Center White Lights Festival and Miller Theatre with Caroline Shaw. Residencies include stints as Julliard’s Graduate Resident String Quartet and Quartet in Residence at the Metropolitan Museum of Art. Plus, they’ve touched down for performances on four continents. In addition, the musicians of the quartet have collaborated with acclaimed artists such as Björk and James Blake and the quartet even appears in the popular video game Red Dead Redemption 2. They were also featured on the soundtrack for Amazon’s Mozart in the Jungle (2016). With 2021’s REAL LIFE, they add a classic twist to a modern sound, defying genres and eras all at once.