Voted #1 must see musical pick at this years SXSW, The Accidentals have just debut their new Roland session where they perform “The Sound A Watch Makes When Enveloped In Cotton” from their debut album, Odyssey, available everywhere here.

“When Sav and I first started writing music as a band, we had a friend that encouraged us every day to be “rockstars.” His belief in us was so powerful that we learned to believe in ourselves. When he passed away tragically during our last year of high school, I wrote a rock song – The Sound A Watch Makes When Enveloped In Cotton – to honor his memory.  We broke out the electric and bass guitars and embraced our inner “rockstar” because he told us we could.

Mentors, role models, fans, and people like our friend Owen, help shape careers. We would like to be that for the next generation.  It’s empowering to be part of a movement of women embracing their craft, honing their talent, and changing the story.

We would not be a band if not for the men and women that influenced our early years.  Our female orchestra director inspired us to be the best musicians we could be; a female string duo called The Moxie Strings led a workshop at our public high school on alternative styles, encouraging us to think outside the box and remove the limits we put on ourselves.  Our sister bands have shared their bases and their wisdom, and artists like Kaki King, Annie Clark, Sarah Watkins, and Amanda Palmer inspired us to own the stage and speak our truth.  We feel lucky to be a part of a continual uprising of female voices that will carry us into the next generation.”

Watch below for more and we’ll see you at this years SXSW! 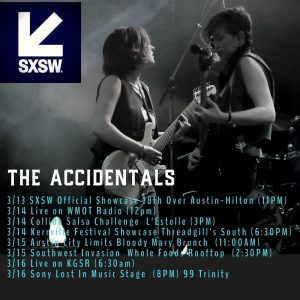